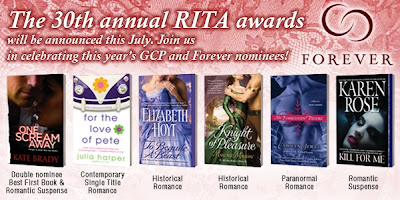 The 30th Annual RITA Award winners are being announced at the 30th Annual RWA Conference held July 28th - 31st and I've been given the honor of bestowing a set of the nominated books listed below upon 3 of my lucky readers!

Killer Chevy Bankes is a master of disguise, and just paroled, he's coming after the woman who sent him to jail, the beautiful antiques expert Beth Denison. A set of antique dolls brings Beth into his sight, and inspire Chevy's disturbing crimes as he draws closer to Beth and her young daughter. Chevy sends the dolls to Beth one-by-one and she soon realizes that these antiques carry the same marks as his victims, signaling that the final piece in his collection will be for her.

Neil Sheridan gave up his FBI shield five years ago, but his best friend Rick, a cop, pulls him in as a consultant on a case involving a serial killer who is eerily similar to a murderer Neil encountered in the past. The investigation leads Neil to Beth's doorstep, and he is certain she isn't telling him the truth. Neil is the only one who can get through Beth's defenses and, as they grow closer, discover the secrets that Beth is hiding about her fateful night with Chevy.

Dante Torelli is an undercover FBI agent assigned to protect a mob informant and his family. But when the informant's hiding place is blown, a baby girl is snatched by a ruthless hitman. Now, Dante must save the toddler, uncover the traitor in his department, evade various bad guys, and deal with the toddler's sexy aunt, all before the biggest mob trial in Chicago history, set to begin in just three days.

When Zoe Adler's stepsister went into the witness protection program because of her sleazeball boyfriend, she wasn't supposed to tell anyone. Except the two sisters have always been close, and Zoe has been babysitting her niece, Pete, since her birth. What harm could it be to secretly get Zoe an apartment in the same building where the FBI is keeping the family under protection? So when someone inside the FBI turns and a hitman snatches Pete, Zoe is right there. During the shootout, she jumps into a sexy, uptight FBI agent's car and hangs on as he pursues the hitman. No matter what it takes, Zoe is going to bring her niece back.

Reclusive Sir Alistair Munroe has hidden in his castle ever since returning from the Colonies, scarred inside and out. But when a mysterious beauty arrives at his door, the passions he's kept suppressed for years begin to awaken.

Running from past mistakes has taken legendary beauty Helen Fitzwilliam from the luxury of the ton to a crumbling Scottish castle . . . and a job as a housekeeper. Yet Helen is determined to start a new life and she won't let dust-or a beast of a man-scare her away.

TO TAME HIS MOST SECRET DESIRES?

Beneath Helen's beautiful façade, Alistair finds a courageous and sensual woman. A woman who doesn't back away from his surliness-or his scars. But just as he begins to believe in true love, Helen's secret past threatens to tear them apart. Now both Beast and Beauty must fight for the one thing neither believed they could ever find-a happy ever after.

THE GREATEST PASSION
Lady Isobel Hume is an expert swordswoman who knows how to choose her battles. When the king asks her to wed a French nobleman to form a political alliance, she agrees. But that's before the devilishly charming Sir Stephen Carleton captures her heart-and tempts her to betray her betrothed, her king, and her country.

IS WORTH THE GREATEST PERIL
Sir Stephen Carleton enjoys his many female admirers-until he dedicates himself to winning the lovely Isobel. So when a threat against the king leads Isobel into mortal danger, Stephen has a chance to prove that he is more than a knight of pleasure...and that love can conquer all.

Alexandrine Marit is a witch in mortal danger. An evil mage craves the powerful, mysterious talisman that supplies her magic, and the only person who can keep her safe is a dark and dangerous fiend called Xia. With his fierce animosity toward witches, he's hardly the ideal bodyguard. Yet as days turn into nights, she can't deny the white-hot passion between them.

Xia hates witches. They enslave and mercilessly kill his kind. But he's been ordered to protect Alexandrine, who, to his surprise, has a spirit he admires and a body he longs to possess. With the mage and his henchmen closing in, Alexandrine and her protector must trust the passion that can unite them...or risk losing everything to the enemies who can destroy them both.

Five teenage girls have been murdered. One survived, and only she can reveal the secrets of a disturbing ring of people who kidnap and sell teenage girls on the black market. But those responsible for the crimes will do whatever it takes to maintain her silence.

Susannah Vartanian and Luke Papadopoulos have both sworn to stop the murderers for their own reasons. Susannah, the sister of the hero in SCREAM FOR ME, suffers from a mysterious past that is connected to the sinister black market. Luke is an investigative agent and a computer expert who refuses to let another child predator get away.

Susannah and Luke are instantly attracted to each other, but their troubled pasts prevent them from immediately acting upon their feelings. The case will lead them to the shady realm of Internet chat rooms, where anyone can mask their identity. As Susannah and Luke draw closer to the criminals, they discover a chain of deception so intricate they don't know who to trust. Susannah and Luke find comfort in one another's arms, but the killers are ruthless and determined, and will take extreme measures to insure their anonymity and keep their business intact.


Win All of These Books!
You can be one of three (3) lucky readers who wins a set of these books!

You must leave a comment telling me which book you think you will enjoy the most!

Optional entries (make sure to comment separately for each additional entry)


RT @curlyq776 I want to win a set of the RITA Awards nominated books (3 winners)! http://bit.ly/d1Ig1K Ends 7/31 @ForeverRomance #giveaway
This giveaway will close on July 31st at 11:59 pm PDT. This giveaway is open to US & Canadian residents. The winner will be chosen via random.org, announced on this blog and notified by email. If the winner does not respond within 48 hours, another winner will be chosen and notified.


Thanks to Forever Romance for sponsoring this giveaway!
Disclaimer: I was not provided any compensation for this post.  Nor was I under any obligation to write a positive review or sponsor a product giveaway in return for the free product.