Have you ever watched the show "Community"?  It kicks off the lineup on NBC on Thursday nights and is one of my favorite TV shows because of the quirky characters and fantastic writing!  The show is about a group of students at a local community college who are placed in a study group together.  They are such a motley crew of individuals who would have never even talked to each other had it not been for the group.  The dynamics of the group make for some very funny situations, sometimes touching and sometimes awkward.

This year, Community is having a special Christmas episode where the characters are all in stop motion animation. 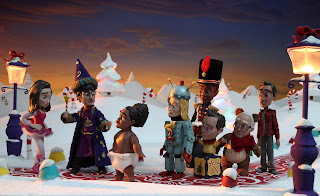 IN THIS SPECIAL STOP MOTION ANIMATION EPISODE, THE MEANING OF CHRISTMAS IS LOST AND ABED’S INTENSE FIXATION ON CHRISTMAS CONCERNS THE GROUP

When Abed (Danny Pudi) wakes up in stop-motion animation, he takes it as a sign that he and the group must re-discover the meaning of Christmas. Meanwhile, Jeff (Joel McHale) and Britta (Gillian Jacobs) become growingly concerned about Abed's mental health and enlist the help of Professor Duncan (John Oliver). The group undergoes hypnosis to explore Abed's winter wonderland and soon unravel the truth behind Abed’s madness. Chevy Chase, Yvette Nicole Brown, Donald Glover, and Ken Jeong also star.

This episode is very typical of the group, funny and sarcastic with some singing thrown into the mix, and you will be touched when Abed finds the meaning of Christmas.  This is a wonderful way to start off all of the Christmas shows on TV as it incorporates a lot of the qualities from those older shows that are replayed each Christmas season.  Don't forget to watch Community tonight with your family! It's on NBC at 8 pm EST/7 pm CST.

Disclosure:  I was not paid for this post.  I wrote this post to be entered to win a prize.  All opinions are my own.

Email ThisBlogThis!Share to TwitterShare to FacebookShare to Pinterest
Labels: Christmas, Community, One 2 One Network